How to Spend 36 HRs in Amsterdam

On a recent trip to Dublin, Ireland, my cousin and I knew we wanted to make the most of our time in Europe and add in an excursion to another country *somewhere* in Europe outside of Ireland. To our delight, we quickly discovered that flights to continental Europe are extremely cheap from the Dublin Airport, so adding on an excursion to our trip was made quite reasonable.

We landed on Amsterdam really because it was the first one that we thought of– but the possibilities are endless. The catch; we only had about 36 hours to explore, eat, and Instagram our way through the city.

How to Spend 36 Hours in Amsterdam

The second after booking our flight to Amsterdam, I bought tickets to the Anne Frank House. The website describes the museum and the experience as one “with a story. As a visitor, you experience this story through quotes, photos, videos, and original items. The atmosphere in the museum is authentic and subdued.” I am not sure if I could explain it any better myself. I walked through the whole museum with chills and tears in my eyes.

My cousin is not nearly as interested in history as I am, yet walked away from her visit equally as touched saying that she was very glad that it was a part of her trip to Amsterdam. As mentioned in the tour, the annex was ordered to be cleared out and remained empty after the war ended. I never knew it was possible to have a museum be so well put together, informative, and touching with very little in it, but with a place with as vibrant a story as this, my naive assumption that museums needed to be full in order to be touching was proven to be very wrong.

Without a doubt, if you are in Amsterdam the Anne Frank Haus is the place to visit. The only thing that I would say is to book your tickets as early as possible because it sells out quickly.

Immediately following our visit to the Anne Frank Haus we hopped on a canal tour to see the whole city of Amsterdam. Though slightly on the pricier side of tours that we did while in Europe, the canal tour was definitely a great way to see the city, especially since we had such a limited time to visit. Our tour line was called Lovers, which was conducted via audio channels that everyone plugged into.

The tour was on the longer side of things, but it was truly well conducted and provided some great photos, and lots of ideas as to how we wanted to spend the rest of our time in Amsterdam.

I don’t know where to start with this one, mostly because it was the place of my dreams. I absolutely love flowers and Bloemenmarkt proved to be one of the coolest places we visited. Even though Dutch tulips weren’t in season as it was December, the dozens of stalls were filled with flowers, souvenirs, and incredibly neat floral fixtures for everyone to see. That being said, I can only imagine how gorgeous it is to visit when everything is in season, and the stalls are even more bustling than they were.

For the most part, my cousin and I walked and ate our way through Amsterdam. We stopped and peered into all of the bakery windows, obsessing over each one that we saw. Crossing all of the bridges and many of the canal ways, we always found ourselves back in the Jordaan Neighborhood/Area of the city.

This area had so many stores that we went into at least two times each. Though many of the storefronts were quite pricey, many approachable pricepoint storefronts were thrown into the mix, providing for a shopping experience to suit everyone. It was also very cool to see high-end and well-known brands mixed in with solo boutiques and quirky, eclectic stores. I had sworn to myself that I wouldn’t shop while in Europe, and the Jordaan Neighborhood blew it for me as it seemed like everything I saw I loved (and obviously needed).

We also ate pastries. Lots of delicious waffles, cookies, croissants, and everything that we could see. Stopping for coffee and mimosas in a few different spots, we also found delightful meals in a conquest to eradicate hanger so bad that I didn’t even stop to look at the name of all of the restaurants and coffee serving coffee shops we went into. Needless to say, the Jordaan Neighborhood had it all, so much so that I could have spent a whole additional day exploring it all.

Amsterdam as a whole is a vibrant, fun city. It is clear that it is rich with history of all sorts, and also has a very fun, relaxed, and fascinating mix of things to do. Whether you are walking the city or biking along the canals like everyone else, it is definitely a place with things for everyone to see and do. We joked that so many of the streets looked the same, yet at the same time found ourselves wandering down each one surprised at how different it was from the next. I was also surprised to learn that public bathrooms are not a thing in Amsterdam, which was not a pleasant discovery and provided for a little panic, but also taught me to carry around a bit of extra change.

All images courtesy of Molly E. 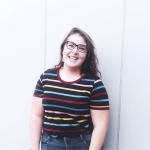 Molly spends a lot of her time exploring her homes in Vermont and D.C., finding the most Instagram worthy coffee shops, finding so many farmers markets her friends are all tired of them, hanging out with her Phi Mu sisters, traveling, and talking about her pets (she's obsessed). She also takes beautiful photos.

How to Spend 2 Days in Quebec City

This site uses Akismet to reduce spam. Learn how your comment data is processed.